A Brief Biography of 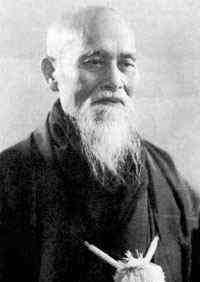 from The Art of Peace

Morihei Ueshiba (1883-1969) was one of history’s greatest martial artists. Even as an old man of eighty, he could disarm any foe, down any number of attackers, and pin an opponent with a single finger. Although invincible as a warrior, he was above all a man of peace who detested fighting, war, and any kind of violence. His way was Aikido, which can be translated as “The Art of Peace.” Morihei Ueshiba is referred to by the practitioners of Aikido as O Sensei, “The Great Teacher”.

The Art of Peace is an ideal, but it developed in real life on many fronts. Morihei in his youth served as an infantryman in the Russo-Japanese War, later battled pirates and bandits during an adventure in Mongolia, and then, after mastering a number of martial arts, served as an instructor at japan’s elite military acadamies. Throughout his life, however, Morihei was sorely troubled by the contention and strife that plagued his world: his father’s battles with corrupt politicans and their hired goons, the devastation of war, and the brutality of his country’s military leaders.

Morihei was on a spiritual quest and was transformed by three visions. The first occurred in 1925, when Morihei was forty-two years old. After defeating a high-ranking swordsman by avoiding all his cuts and thrusts (Morihei was unarmed), Morihei went into his garden. “Suddenly the earth trembled. Golden vapor welled up from the ground and engulfed me. I felt transformed into a golden image, and my body seemed as light as a feather. All at once I understood the nature of creation: the Way of a Warrior is to manifest Divine Love, a spirit that embraces and nurtures all things. Tears of gratitude and joy streamed down my

cheeks. I saw the entire earth as my home, and the sun, moon, and stars as my intimate friends. All attachment to material things vanished.”

The second vision took place in December of 1940. “Around two o’clock in the morning as I was performing ritual purification, I suddenly forgot every martial art technique I ever learned. All of the techniques handed down from my teachers appeared completely anew. Now they were vehicles for the cultivation of life, knowledge, virtue, and good sense, not devices to throw and pin people.”

The third vision was in 1942, during the worst of the fighting of World War II and in one of the darkest periods of human history. Morihei had a vision of the Great Spirit of Peace, a path that could lead to the elimination of all strife and the reconciliation of humankind. “The Way of the Warrior has been misunderstood as a means to kill and destroy others. Those who seek competition are making a grave mistake. To smash, injure, or destroy is the worst sin a human being can commit. The real Way of a Warrior is to prevent slaughter – it is the Art of Peace, the power of love.” Morihei secluded himself in the country and devoted every minute of his life thereafter to refining and spreading Aikido, the Art of Peace.

Unlike the authors of old-time warrior classics such as The Art of War and The Book of Five Rings, which accept the inevitability of war and emphasize cunning strategy as a means to victory, Morihei understood that continued fighting – with others, with ourselves, and with the environment – will ruin the earth. “The world will continue to change dramatically, but fighting and war can destroy us utterly. What we need now are techniques of harmony, not those of contention. The Art of Peace is required, not the Art of War.” Morihei taught the Art of Peace as a creative mind-body discipline, as a practical means of handling aggression, and as a way of life that fosters fearlessness, wisdom, love, and friendship. He interpreted the Art of Peace in the broadest possible sense and believed that its principles of reconciliation, harmony, cooperation, and empathy could be applied bravely to all the challenges we face in life – in personal relationships, as we interact with society, at work and in business, when dealing with nature. Everyone can be a warrior for peace.

Although Aikido originated with Morihei in Japan, it was intended to be a gift for all humankind. Some have chosen, or will select in the future, Aikido as their own particular Way, practicing it on the mats and applying it to their daily lives. Many more have been and will be inspired by the universal message of the Art of Peace and its implications for our world. 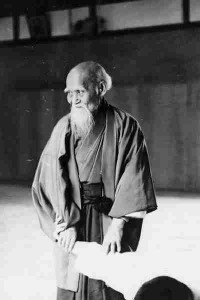 The divine beauty
Of heaven and earth!
All creation,
Members of
One family.